You are here: Home / About / People / Dr Aikaterini Dima

Aikaterini (Katerina) Dima is a graduate of the Aristotle University of Thessaloniki in Greece and a practising medical doctor in the UK. She served as Liaison Officer for Medical Education issues 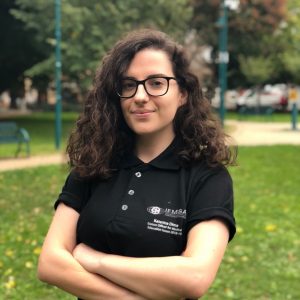 at the International Federation of Medical Students’ Associations (IFMSA) between 2017 and 2019, where she represented IFMSA in the WFME Executive Council and the AMEE Executive Committee.

She further represented IFMSA in many international meetings, such as the United Nations General Assembly, the World Health Assembly and the WHO Conference on Primary Health Care.

Katerina is currently working as Clinical Research Associate in the South London and Maudsley Trust and the Institute of Psychiatry, Psychology and Neuroscience – dividing her time between Mental Health-related Clinical Trials and the National Psychosis Unit at the Bethlem Royal Hospital.

She is also a MSc candidate in Medical Research Methodology from the Aristotle University of Thessaloniki.

Katerina is very passionate about psychiatry, mental health and law as well as medical education, accreditation and quality assurance and last but not least, baking.