You are here: Home / News

Our attention has been drawn to a directive published by the Ministry of Health of Israel, which sets out requirements for medical students who plan to study outside Israel and then to apply to work in Israel. WFME would like to clarify several facts about the process of Recognition.

END_OF_DOCUMENT_TOKEN_TO_BE_REPLACED

Educational Commission for Foreign Medical Graduates (ECFMG) has released a detailed plan on the progress towards 2023. Starting 2023, applicants for ECFMG Certification, which is required for international medical graduates to train or practice in the United States, must be from a medical school that is appropriately accredited. More specifically, the school must be accredited by an accrediting agency that has earned the Recognition Status in the WFME Recognition Programme.

ECFMG has devised a 4-phase plan which is being implemented as 2023 approaches:

World Directory of Medical Schools will include the information whether a medical school is accredited by an organisation recognised by WFME.

ECFMG physician reports to residency programs, employers, state boards, and medical regulatory authorities will include a statement on the accreditation status of the medical school.

Individuals will be eligible to apply for ECFMG Certification if their medical school is accredited by an organisation recognised by WFME.

Find our more about the WFME Recognition Programme on the dedicated page, or contact WFME at accreditation@wfme.org.

Further information about the 2023 policy will be published on the ECFMG website in due course. For specific questions about the policy use the email address 2023@ecfmg.org.

Accreditation Organisation of the Netherlands and Flanders (Nederlands-Vlaamse Accreditatieorganisatie) (NVAO)  has been awarded Recognition Status by the World Federation of Medical Education. The NVAO is the fourteenth accrediting agency that has received the WFME Recognition Status.

Three accrediting agencies been awarded Recognition Status by the World Federation of Medical Education – these agencies operate in Georgia, Indonesia and Thailand. All three agencies have been recognised for the full term of 10 years.

The Recognition Criteria against which WFME assesses accrediting agencies world wide have gone through a minor revision. Three changes have been introduced to the document:

The Recognition Programme delivers an independent, transparent and rigorous method of ensuring that accreditation of medical schools worldwide is at an internationally accepted and high standard. WFME evaluates compliance of accrediting agencies with pre-defined criteria.The Criteria focus on the key elements of the agency’s functioning:

This week marks the 30th anniversary of the Edinburgh Declaration, an influential document which set out to promote “a sustained and organised programme to alter the character of medical education so that it truly meets the defined needs of the society in which it is situated”. Many will not know that the Declaration was the outcome of an initiative of the World Federation for Medical Education, starting in 1984. This note is about the history of how it happened.

When Henry Walton was President of WFME between 1983 and 1996, the single most important activity of the Federation was the “International Collaborative Programme for the Reorientation of Medical Education”.

The call to WFME to reform medical education internationally came in 1984. WFME initiated the most intensive global enquiry ever planned and conducted. A planning document covered six themes and posed 32 key questions, was translated into many languages and sent to the Deans of all medical schools in the world. The responses received were compiled into national reports, discussed in national conferences and analysed by the six Regional Associations of WFME. The regional report s were brought together to become the background material for the World Conference on Medical Education in Edinburgh in 1988.

The 1988 World Conference, at its final plenary session, expressed its recommendations in the ground-breaking Edinburgh Declaration.

Because so many of the recommendations emerging had legislative, legal and statutory implications, ministers of health and ministers of education were brought together with medical educators and health care administrators in a structured series of consultations in 1988 – 1989.

As well as being widely accepted by medical teachers, medical students, medical doctors and other health professionals, and the general public around the globe, the Declaration was discussed at the World Health Assembly in 1989, which endorsed The Edinburgh Declaration by adopting WHA Resolution 42.38 of 19 May 1989.

The Edinburgh Declaration was followed by a surge of reform worldwide greater than any since the start of the 20th century, and the Declaration remains an essential basis of reform and reorientation of medical curricula worldwide.

The Edinburgh Declaration was the subject of an entire issue of Medical Education, in January 2018 (Volume 52, Issue 1). Each of the lines of action proposed by the Declaration was examined in the issue. On every line, there has been great progress, but there is also far to go. In many areas, variable progress is the outcome of cultural differences. In some countries, the idea of “all health resources of the community, not hospitals alone” being used for education of medical students is anathema. The use of “measures of personal qualities” in the selection of medical students, not just academic achievement alone is proscribed in some jurisdictions.

In April 2019, WFME will hold a World conference under the common theme of “Quality Assurance in Medical Education in the 21st Century”. We invite all interested parties to come and discuss together the challenges we are facing world wide and opportunities we have to improve the quality of medical education. We are looking forward to welcoming representatives of physicians, educators, researchers and students from all over the world.

The main topics to be discussed: 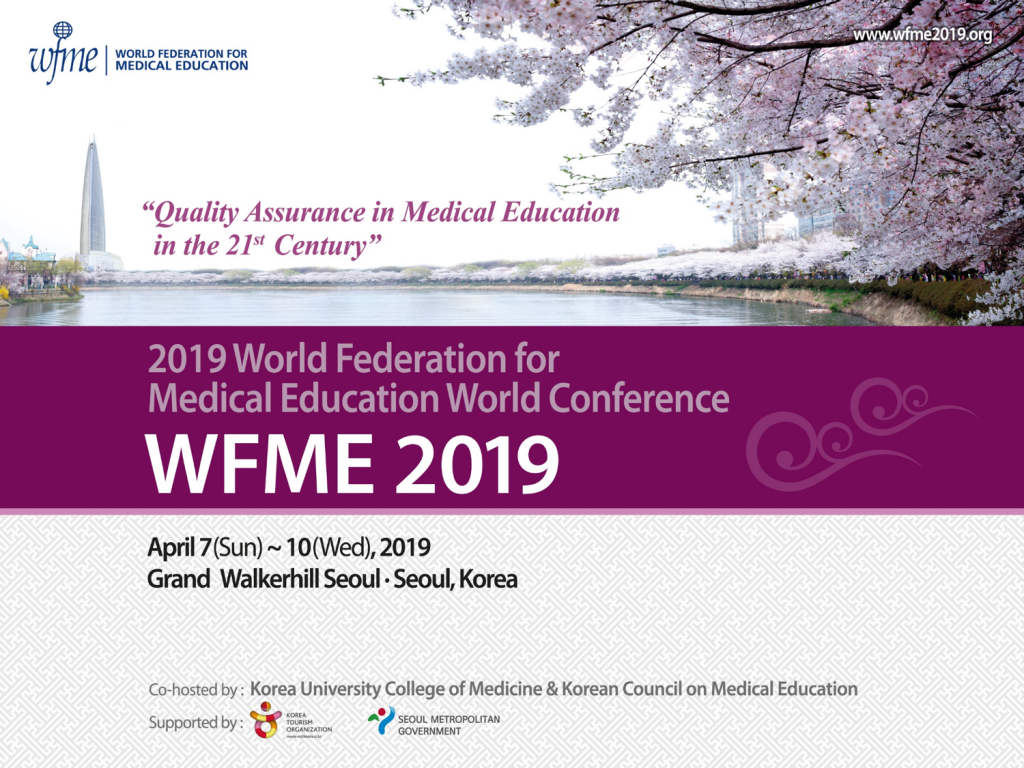 The scientific committee welcomes your submission of abstracts for the 2019 WFME World Conference. Abstract of original work related to quality development in medical education will be welcome. Accepted abstracts will be presented in the “Free Paper Sessions” and/or “Posters” during the conference. All abstracts must be submitted via the WFME 2019 Conference website at www.wfme2019.org from July 2, 2018.

We are glad to announce, that the Juniors Doctors Network (JDN) has became new official member of the WFME Executive Council at the EC meeting in Yogyakarta, Indonesia.

The Junior Doctors Network (JDN) is the representative body for junior doctors and is related to the World Medical Association (WMA). Any junior doctor who is an Associate Member of the WMA may be part of the JDN, and although many are individual members, many are also representatives of their respective National Medical Associations. The International Federation of Medical Students’ Associations (IFMSA) (HCG) has worked with WFME and with the WMA for many years, and the JDN provides the natural progression and development of this relationship from the point of medical graduation to the time of completion of postgraduate medical education.

The JDN has attended WFME Executive Council meetings as an observer since 2015.

“Empowering young physicians to work together towards a healthier world through advocacy, education and international collaboration”

– is in alignment with WFME priorities and a closer relationship is expected to be beneficial for both organisations.

In particular, cooperation with the JDN Education division will be of increasing importance to improve quality in postgraduate medical education and to promote accreditation of postgraduate education.